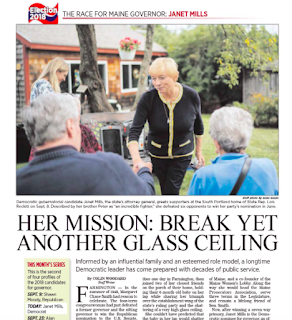 With Paul LePage term limited, there’s a competitive race for Maine Governor this fall. Over the late summer, I’ve been at work on a series of in-depth profiles of the four general election candidates seeking to replace him — pieces that ask who they are, where they came from, and what shaped their world view.

The latest is on Democratic nominee Janet Mills and appears in this week’s Maine Sunday Telegram. It traces her origins in a western Maine political family closely allied to the late US Senator Margaret Chase Smith through a half-century career in public service as a criminal prosecutor, district attorney, legislator, women’s rights advocate, and attorney general.