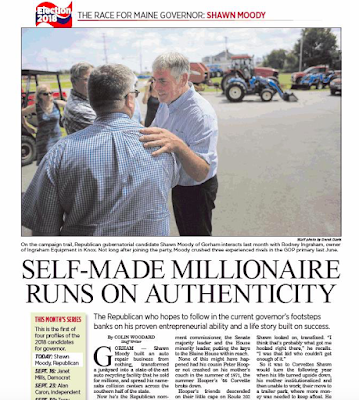 Maine’s bombastic governor, Paul LePage, is term limited and leaves office early next year. Over the past six weeks I’ve been at work on a series of in-depth profiles of the four general election candidates seeking to replace him — pieces that ask who they are, where they came from, and what shaped their world view.

The first is on Republican nominee Shawn Moody and appears in today’s Maine Sunday Telegram, tracing his ascent from the 12-year old kid left alone for a month after his mother was sent to the state mental institution to a self-made millionaire who vanquished three more experienced Republican figures to put the keys to the Blaine House within reach.

The remainder of the series rolls out like this: Democratic nominee Janet Mills (on Sept. 16); independent Alan Caron (on Sept. 23); and independent Terry Hayes (on Sept. 30.) [Updated this with links as available.]