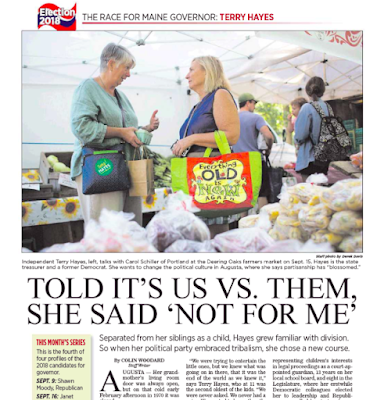 Here in Maine, there’s a four-way race to replace Governor Paul LePage, and I’ve been writing in-depth profiles of each of the contenders for the Maine Sunday Telegram — pieces that ask who they are, where they came from, and what shaped their world view.

The final installment is in this week’s Telegram, and is on state treasurer Terry Hayes, one of two independents in the race, who was effectively orphaned at 11, built a career in education, and served in the legislature as a Democrat before becoming state treasurer with largely Republican backing.

The other stories in the series are on Democratic nominee Janet Mills; Republican nominee Shawn Moody; and independent Alan Caron.

Previous: The Making of Alan Caron, independent candidate for Maine governor
All Articles
Next: Coalition of pro-offshore oil governors is run by oil lobbying firm