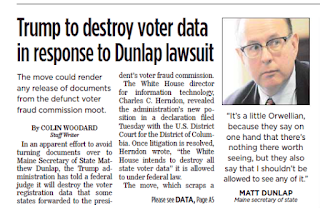 The struggle over transparency at President Trump’s voter fraud commission continues even after its demise.

In yesterday’s Portland Press Herald, I updated the ongoing drama between the White House and Maine Secretary of State Matthew Dunlap, one of four Democrats on the 11 member commission, who said he was frozen out of its deliberations for months and in November sued to gain access to working papers, past, present and future.

Trump pulled the plug on the commission Jan. 3, apparently on account of Dunlap’s lawsuit, and Justice Department lawyers then informed Dunlap that, despite a court order, they would not be immediately turning over the documents. Dunlap then asked the court, in effect, to enforce its order, especially as the White House had said they were turning the voter registration data collected by the commission — and its alleged “preliminary findings” — to the Department of Homeland Security, which would continue the voter fraud work.

Only now that plan has been dumped.

This past week, the administration has instead announced it intends to erase all the voter registration data it collected, thereby removing one of the reasons Dunlap had argued he should be allowed to see its working papers. Dunlap told me it was “Orwellian.”

Details in the story.

Previous: Trump disbands voter fraud commission, which now refuses to give Dunlap documents
All Articles
Next: Gov. LePage’s support for offshore drilling at odds with every New England member of Congress