I’m on Twitter quite a lot because, for better or worse, its the news media’s nervous system and I’m in the news media. So I was surprised and pleased earlier this month when @Jack himself — Jack Dorsey, co-founder and CEO of Twitter — piped up with this: 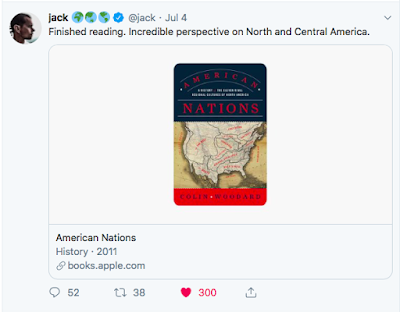 He probably hasn’t seen my response — I don’t have a blue check — but I said I’d love to do an analytical collaboration using the American Nations model and Twitter data. So, Jack, if you’re listening, drop me a DM.

Dorsey’s is the third famous person to plug American Nations in a Tweet in recent months, and I suspect this is the only book to receive praise from this particular trio, the other two being Jeff Daniels and Glenn Beck.

Meanwhile, at this writing, Amazon has the Kindle edition of the book on special for $1.99, for those who, unlike me, don’t mind reading books on screen.